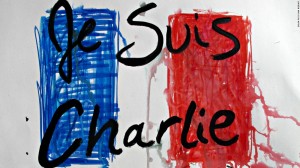 I am not a big fan of any of the organized religions of this world. I don’t really believe in what they promote and I am convinced that all of them have utterly failed to accomplish anything of significance.

However, I am prepared to respect what other people decide to believe (as long as I get the same respect from them), It is none of my business if someone believes this or that book to be true. However, what I am NOT prepared to accept is that someone uses any religous belief as a cheap and lame excuse to go and harm people for the simple and only reason that they believe in something different.

The fact that someone believes that they have the right to kill people just because they have “insulted” a potentially fictional character of some old book infuriates me beyond words. If these fanatics believe that by doing these stupid things they are promoting their beliefs or avenging “the prophet” well, they are very wrong and in my opinion has the oppossite effect.

Thanks to this wackos, I want to remain as far as I can from their belief system and would totally support the efforts of any government that takes the steps they deem necessary to ensure that something like the terrible thing that happened in Paris does not repeat again.

In the meanwhile, it is very encouraging to see all the support the victims and their families have received from around the world. I think that this shows that there is still hope for the human race and that the good people far outweigh the bad guys out there trying to harm innocent people.

What do you think? Cancel reply

This site uses Akismet to reduce spam. Learn how your comment data is processed.

With great joy I share with you the release of my first book! A gripping collection of medieval fantasy short stories that recount the adventures of Loïc the strong and his knights as they fight to free the twin realms of a terrible curse.
Late boat ride in #lacleman
Cruise at sunset...
I can fly! One of the great things about diving is the feeling of defying gravity on earth while floating around underwater. It's like having superpowers!
A quiet afternoon by the lake... A walk by the Montreux riviera is always lovely, but when the sun sets and sets the clouds on fire, is magical!
The three musketeers... As I looked up I saw this group of divers heading towards the surface. The sun created a nice effect on the silhouettes.
Follow Opinions, stories, pictures and thoughts… on WordPress.com
%d bloggers like this: